The Minnesota Vikings have cut ties with kicker Daniel Carlson one day after he went 0-for-3 on field goals against the Green Bay Packers. Minnesota is replacing the rookie with veteran kicker Dan Bailey. The Vikings also announced the signing of wide receiver Aldrick Robinson Carlson missed field goals from 48, 49 and 35 yards out in the Vikings 29-29 overtime tie against the Packers. After his first field goal attempt in OT sailed wide right, Minnesota went back to Carlson to kick a 35-yard would-be game-winner. Postgame, Carlson hinted that nerves likely played a role in missing his final kick. “It feels terrible. Obviously I let my team down,” Carlson said. “That last one was probably more just confidence after missing twice early. That’s frustrating. That shorter one I should never miss like that.” 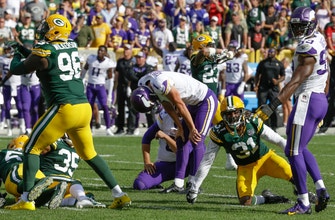